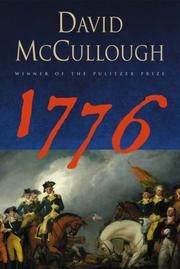 A master storyteller’s character-driven account of a storied year in the American Revolution.

Against world systems, economic determinist and other external-cause schools of historical thought, McCullough (John Adams, 2001, etc.) has an old-fashioned fondness for the great- (and not-so-great) man tradition, which may not have much explanatory power but almost always yields better-written books. McCullough opens with a courteous nod to the customary villain in the story of American independence, George III, who turns out to be a pleasant and artistically inclined fellow who relied on poor advice; his Westmoreland, for instance, was a British general named Grant who boasted that with 5,000 soldiers he “could march from one end of the American continent to the other.” Other British officers agitated for peace, even as George wondered why Americans would not understand that to be a British subject was to be free by definition. Against these men stood arrayed a rebel army that was, at the least, unimpressive; McCullough observes that New Englanders, for instance, considered washing clothes to be women’s work and so wore filthy clothes until they rotted, with the result that Burgoyne and company had a point in thinking the Continentals a bunch of ragamuffins. The Americans’ military fortunes were none too good for much of 1776, the year of the Declaration; at the slowly unfolding battle for control over New York, George Washington was moved to despair at the sight of sometimes drunk soldiers running from the enemy and of their officers “who, instead of attending to their duty, had stood gazing like bumpkins” at the spectacle. For a man such as Washington, to be a laughingstock was the supreme insult, but the British were driven by other motives than to irritate the general—not least of them reluctance to give up a rich, fertile and beautiful land that, McCullough notes, was providing the world’s highest standard of living in 1776.

Thus the second most costly war in American history, whose “outcome seemed little short of a miracle.” A sterling account.