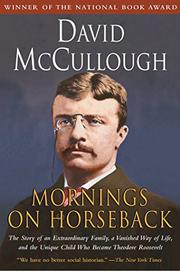 The Story Of An Extraordinary Family, A Vanished Way Of Life And The Unique Child Who Became Theodore Roosevelt

The biographer of the Brooklyn Bridge and the Panama Canal has written a marvelous book, now, about the making of an exceptional being—and nothing that has appeared before, including Edmund Morris' recent The Rise of Theodore Roosevelt, diminishes its interest or freshness or emotional force. Indeed, those familiar with the story of the puny, sickly boy who made himself over by will power alone have the most to look forward to. That is not, for one thing, what McCullough found in the thousands of Roosevelt family letters. But he does not merely offer another, more complex and fine-tuned interpretation; he has embedded it in the true-life equivalent of a Russian novel of relations and generations, of mood and moment (whence those "mornings on horseback" at Oyster Bay) and shaded characterization. Here is Theodore Roosevelt, Sr.—"a great bearded figure of a man. . . readily touched by the sufferings of others." New York gentleman; newsboys' friend; foe of venal politicians. His forever-Southern, forever-young wife Mittie, "Little Mama"—whose heroic tales conveyed "a sense of bloodline kinship with real-life men of action." Her brother James Bulloch—builder of the celebrated Confederate raider Alabama, no less admirable to his proUnion nephew. Older sister Bamie, "Papa's pet"—plain, stooped, bright, absolutely dependable. Responsible, as a tiny, stricken child, for the family conviction "that physical well-being and mental outlook are directly correlated." Younger brother Elliott—serene, kind-hearted; long the bigger of the two, and the better athlete. (His "strange seizures," beginning at 14, will reverse their positions; and with Ellie's drinking and descent, one awaits with pity and dread the birth of his daughter Eleanor.) And frail, asthmatic, intent, untiring "Teedie." McCullough devotes a chapter to childhood asthma—the total, terrifying agony, the exuberance afterward; the immediate, "exciting" family response, especially in privileged circumstances; the timing of the attacks—in TR's case, on Saturday nights, gaining him joyful Sundays out-of-doors with Papa; the sense of power and. with it, a sense that "life is quite literally a battle." At 13, TR acquires a gun and a pair of glasses; through an idyllic winter in Egypt, he shoots and stuffs birds; there are no asthmatic attacks. Ellie's seizures begin—TR is pulling ahead academically. He goes off to Harvard, "his first solo venture into the world," still spindly—despite his bodybuilding exercises—and still squeaky-voiced. The asthma all but vanishes. There follows: his father's political defeat (to be avenged?), and his death; TR's second, newly-popular two years at Harvard, capped by the conquest of "bewitching," Mittie-like Alice Lee; his high-charged political novitiate, and sobering introduction (by Samuel Gompers) to poverty; two sudden, terrible deaths—Mama's and Alice's; work (and silence); the distressing nomination of Blaine, whom TR will nonetheless support, knowing his father would have done differently. The book culminates, in the "Bad Land years," with his discovery of the cowboy—whose code was akin to the family code and who could also deal with death. His body fills out, his voice deepens, his speech takes on eloquence; he doesn't seem surprised when an acquaintance predicts that he'll become President. All of McCullough's considerable gifts—as scholar, analyst, dramatist—are focused on an inexhaustible subject.a