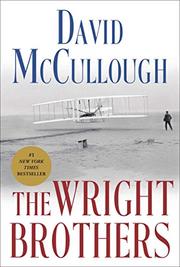 A charmingly pared-down life of the “boys” that grounds their dream of flight in decent character and work ethic.

There is a quiet, stoical awe to the accomplishments of these two unprepossessing Ohio brothers in this fluently rendered, skillfully focused study by two-time Pulitzer Prize–winning and two-time National Book Award–winning historian McCullough (The Greater Journey: Americans in Paris, 2011, etc.). The author begins with a brief yet lively depiction of the Wright home dynamic: reeling from the death of their mother from tuberculosis in 1889, the three children at home, Wilbur, Orville, and Katharine, had to tend house, as their father, an itinerant preacher, was frequently absent. McCullough highlights the intellectual stimulation that fed these bookish, creative, close-knit siblings. Wilbur was the most gifted, yet his parents’ dreams of Yale fizzled after a hockey accident left the boy with a mangled jaw and broken teeth. The boys first exhibited their mechanical genius in their print shop and then in their bicycle shop, which allowed them the income and space upstairs for machine-shop invention. Dreams of flight were reawakened by reading accounts by Otto Lilienthal and other learned treatises and, specifically, watching how birds flew. Wilbur’s dogged writing to experts such as civil engineer Octave Chanute and the Smithsonian Institute provided advice and response, as others had long been preoccupied by controlled flight. Testing their first experimental glider took the Wrights over several seasons to Kitty Hawk, North Carolina, to experiment with their “wing warping” methods. There, the strange, isolated locals marveled at these most “workingest boys,” and the brothers continually reworked and repaired at every step. McCullough marvels at their success despite a lack of college education, technical training, “friends in high places” or “financial backers”—they were just boys obsessed by a dream and determined to make it reality.

An educational and inspiring biography of seminal American innovators.