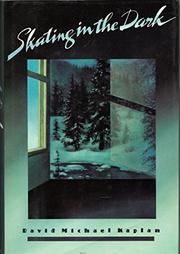 SKATING IN THE DARK

Here, Kaplan (Comfort, 1987) offers a collection of interrelated stories (marketed as a novel) that trace the coming of age, marriage, and divorce of a suburbanite. The whole is a little too calculated, likable but lacking in real power, though two or three pieces stand out as more than mere slice-of-life Weltschmerz. Between 1951 and 1990, narrator-protagonist Frank (the point of view varies) likes to break into houses, especially his own. In ``Break-in'' (1959), he says, ``Our life in crime seemed predestined'' before breaking into his parents' house with his friends and getting drunk. In the title story, Frank and Jane, his wife of three years, break into his parents' summer house, where they learn that they ``are increasingly doomed to say things they don't mean.'' The author plays with such before-and-after parallels throughout: in ``Governotou'' (1969), Frank goes to Crete alone, while in ``Tombs'' (1976), he goes with Jena, and a guide serves as a device that dramatizes their estrangement. By the last section, ``Homecoming''—which deals with the aftereffects of divorce—the attentive reader is repaid for too much minutely observed slightness. Frank breaks into the house where he and Jena (now remarried) once lived and telephones her for a sad, anguished conversation. In the powerful ``Stand,'' he returns to his parents' summer house, which has been sold, and has a tense, frightening encounter with some locals. Finally, ``In the Night'' (1990) lets Frank recoup a great deal of earlier wimpiness and self-pity as he talks girlfriend Allie, always on the verge of breakdown, through a crisis, making his life ``more redeemable somehow.'' ``You don't get it, do you?'' the wife asks. ``You don't see how...how sad it all is.'' These stories, one reprinted in the O. Henry Prize Stories 1990, are aptly elegiac—the fictional record of a sterile, childless marriage.