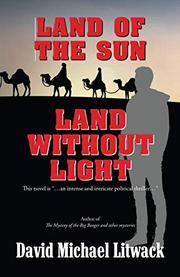 LAND OF THE SUN, LAND WITHOUT LIGHT

An all-American antihero becomes entangled in Cold War geopolitics while acting as a Peace Corps emissary to North Africa in this historical thriller.

Litwack’s (The Mystery of the Big Booger, 2015) novel is presented as a stack of ephemera from Harrison “Harry” Hamblin documenting his experiences from 1967 to ’69; he left it in what is presumably newly independent Chad—although a post-postscript reveals orders by his superiors to never reveal precise locations. The reason for such secrecy becomes clear when Harry describes how the U.S. government approached him to be their “eyes and ears” in the area. His clandestine activities entangle him in a morass of local interests, colonial vestiges, and foreign superpowers. The lengthy tale, which proceeds chronologically, is highly fragmented, and its affected realism sometimes makes the plot feel almost incoherent; Litwack only manages to maintain momentum with strong dialogue and a barrage of characters. The diversity of the cast that Hamblin encounters—which include a Soviet doctor, a drunken Irish priest, a Hindu teacher, a tough restaurateur, and an enchanting princess—results in perpetual cultural collisions from which arise discussions about theology, the problem of suffering, and the limits of American exceptionalism. The variety of personalities is indeed entertaining. However, Litwack fails to meaningfully develop any character other than Harry—a former Boy Scout, a heavy drinker of brown liquors, an atheist, and a womanizer who considers himself romantic. Hamblin feels that he’s “living the life of Livingston—or Conrad—or Kurtz—or any other of the European figures of this heart of darkness”; at the same time, he’s also obsessed with distinguishing himself from other “Nasarah”—a slur generally deployed to denote Europeans—as he embarks on several romantic trysts, visits a leper colony, sends coded messages in the middle of the night, rides into rebel camps, survives debilitating illness, and organizes a high-stakes horse race, all while embedding himself deeper in the region. As tensions bubble over, he and his colleagues attempt a daring escape, with mixed results.

This espionage tale has a strong sense of history but falls short on character development.