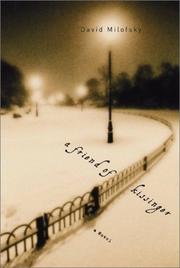 A FRIEND OF KISSINGER

Milofsky (Color of Law, 2000, etc.) returns with a coming-of-ager set in 1970s Milwaukee, the story of a young man’s emergence from the confines of a close-knit but troubled family.

When Danny Meyer went back to Milwaukee for his father’s funeral, it was his first visit in nearly 30 years to the home that he thought he’d been glad to leave forever. Born in Madison, Danny moved with his family to Milwaukee as a boy when his father became ill and had to give up his post at the University. Milwaukee was a big step down for the Meyers, who had enjoyed their status as a faculty family in college-town Madison, but Danny managed to find a kindred spirit in his classmate Joey Goodstein, whose family had also fallen on hard luck when his hotshot lawyer father had been sent to prison as a racketeer. Danny does well in school, partly because he finds refuge from his father’s illness and his brother’s mental delusions by retreating to an empty storage room in the basement of their apartment building to read. He also makes the acquaintance of Anna, a Holocaust survivor who lives down the hall and dotes on him. After Anna’s husband dies, she becomes the lover of Jesús, a Guatemalan immigrant who speaks no English and got into the country without papers. Anna writes to Henry Kissinger, whom she knew as a child in Germany, asking his help in getting a green card for Jesús, and Kissinger actually replies, offering his advice and assistance. In order to straighten out his status, however, Jesús must return to Guatemala and reenter the US. Anna goes with him, bringing Danny along. Eventually, Danny wins a scholarship to a good school and ends up a happy family man in Colorado.

Well-crafted and intelligent—yet lifeless and rambling: a ramble through Danny’s adolescence that has too much incident and too little focus to be engaging.