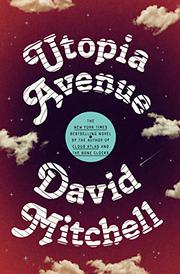 There’s no time-hopping, apart from a brief epilogue set in the present, or elegant experiments in genre-busting in Mitchell’s latest novel, his first since Slade House (2015). Oh, there are a couple of winking references to Cloud Atlas (2004), which here takes the form of “overlapping solos for piano, clarinet, cello, flute, oboe and violin,” and ace rock ’n’ roll guitarist Jasper de Zoet is eventually revealed to descend from the eponymous hero of The Thousand Autumns of Jacob de Zoet (2010). Mostly, though, we’re on realistic ground not seen since Black Swan Green (2006), and Mitchell digs deep in his saga of how two top-of-their-form players—de Zoet and ill-fated bassist Dean Moss—recruit an unlikely keyboardist and singer in the form of an ethereal folkie named Elf Holloway, who goes electric and joins them in a band that Jasper deems “Pavonine….Magpie-minded. Subterranean.” The usual stuff of rock dramas—the ego clashes, the drugs, the hangers-on, and record-company parasites—is all there, but Mitchell, who wasn’t born when Utopia Avenue’s putative first album was released, knows exactly which real-life musicians to seed into the story: There’s Gene Clark of The Byrds, for example, who admires a guitar figure of Jasper’s (“So that’s an F major seventh?…I call it ‘F Demented’ ”). Janis Joplin, Leonard Cohen, Syd Barrett, Jackson Browne, and Jerry Garcia turn up (as does, decades later, the brilliant band Talk Talk, acknowledging a debt to the Utopians). There’s even a highly learned if tossed-aside reference to how the Stones’ album Let It Bleed earned its name. Bone spurs and all, it’s realistic indeed and just the thing for pop music fans of a bygone era that’s still very much with us.

Those whose musical tastes end in the early 1970s—and literary tastes are up to the minute—will especially enjoy Mitchell’s yarn.