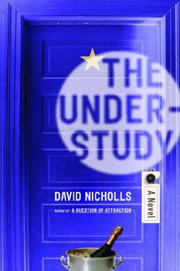 Professionally, the best thing Stephen C. McQueen has going for him is his famous-sounding name. His résumé suggests that, whatever the well-known theater adage might say, there are small roles—a seemingly endless supply of them, in fact. Stephen has turned in purposefully forgettable performances as “Rent Boy 2” and “Dead Young Man,” and he has dressed up as a giant singing squirrel for the sake of his art. His latest gig isn’t even acting; it’s being prepared to act, should the need arise. He’s playing understudy to budding transatlantic film star and ascendant heartthrob Josh Harper in a West End show. Gorgeous, charismatic and spectacularly uncomplicated, Josh is everything Stephen isn’t, but Stephen is able to keep his envy at controllable levels until he meets Josh’s wife. Nora is as real as Josh is superficial, and she’s got a dry wit and a voluptuous bod, too. Stephen falls in love with her more or less immediately, so the friendship that develops between the two is as torturous as it is satisfying. When Stephen stumbles upon a shameful secret in Josh’s personal life, he is torn between his loyalty to Nora and the opportunity to finally make his name as an actor. There’s plenty of material for screwball hilarity here, and Nicholls (A Question of Attraction, 2004) truly makes the most of it. His prose is laugh-out-loud funny, and he’s equally adept at handling complex emotional issues. In the rigidly orthodox realm of romance, breaking up a marriage is a risky move, but Nicholls pulls it off without creating any cartoonish villains or letting his characters off the hook for questionable behavior. The ending he contrives should please the sentimentalist and the moralist both.

This jaunty, big-hearted novel is chick lit with a Y-chromosome.