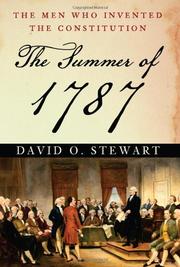 The Men Who Invented the Constitution

A careful account of how the Founders fashioned America’s central document.

Only a decade after gaining independence from Britain, the 13 colonies found their loose alignment under the Articles of Confederation utterly deficient. They were unable to levy taxes, regulate trade, settle border and navigational disputes, raise a military or issue a common currency. A taxpayer revolt turned bloody in Massachusetts and the still formidable threat of Spain and England in North America helped accelerate calls to amend the Articles. During a humid Philadelphia summer and under a rule of secrecy, 55 delegates from 12 states (Rhode Island demurred) exceeded their authority, scrapped the unwieldy Articles and wrote instead a charter of government for and by the people. Attorney Stewart focuses on how this “assembly of demi-gods” (Jefferson’s phrase) reconciled the vast differences among the states—large vs. small, slave vs. free, agricultural vs. mercantile—and adjusted federal and state powers accordingly. Two towering figures, Washington and Franklin, lent their prestige to the convention. With the exceptions of Madison and Hamilton, history’s notice of the rest (the likes of Gouverneur Morris, Roger Sherman, David Brearley and three distinguished dissenters, George Mason, Elbridge Gerry and Edmund Randolph) centers on their contributions to the convention’s unprecedented deliberations. Stewart touches lightly on the delegates’ personalities; he’s at his best discussing the wrangling that resulted in a document simultaneously “the child of lofty idealism and rough political bargains.” The delegates didn’t get everything right. The notorious three-fifths rule embedded slavery in the charter; it required a civil war to expunge this injustice, and the Founders’ conception of the presidency has been frequently, though less violently, amended. Still, history’s first written constitution has proven remarkably durable.