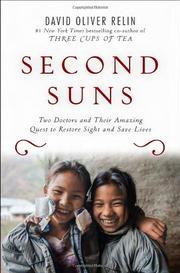 The tortuous route of two intrepid eye doctors, one Nepalese, one American, in their journey to eradicate preventable blindness in the Himalayas.

Journalist and co-author of another inspiring story of humanitarian accomplishment, the best-seller Three Cups of Tea, Relin, who died last year, pursued the two founders of the Himalayan Cataract Project, over several years as they established their partnership and shared mission. Sanduk Ruit, a Nepalese-born ophthalmologist, was profoundly unsettled by the high rates of preventable blindness in Nepal and returned to apply advanced techniques in microscope-directed cataract surgery he had gained under unconventional Australian eye doctor Fred Hollows. Modeling his eye-care mission for the legions of rural poor on Hollows’ groundbreaking work among the Aboriginal population, Ruit pioneered the use of mobile units and surgical camps in Nepal’s underserved rural areas to bring quick and efficient cataract surgery to the many poor people whose lives were ruined by preventable blindness. Attracting talented doctors from all over the world, notably the hyperactive mountaineer and Harvard-educated ophthalmologist Geoffrey Tabin, Ruit ignored his critics, who claimed the facilities were unsanitary or too costly to maintain, mastering the delicate surgery in an average of four minutes per patient, at a fraction of Western costs. Along with charitable funds from USAID and others, Tilganga, launched in 1992, expanded in 2009 and became self-sustaining by producing intraocular lenses; it has continued to thrive despite Maoist insurgency and massacre within the royal Nepalese family in 2001. The author, who evidently became a favorite of the doctors, even assisting in the hospitals, fashions a detailed, heartfelt account of the work of these dedicated pioneers.

Doubly moving in light of Relin’s own untimely death.