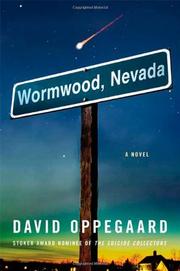 Tyler and Anna Mayfield have just relocated from their native Nebraska to sun-blasted Wormwood, Nev., where Tyler has taken a job teaching high-school English. Things turn immediately odd and sinister. Tyler starts seeing (or thinking he sees) aliens; Anna is tormented by persistent nightmares about the world’s end. Then a meteorite crashes into the parking lot of the local taquería, whose proprietor subsequently erects a crater-side shelter and hunkers down in it, holding up a sign reading “The End Is Near.” Tyler confides in his aunt, who introduces him to a loopy astronomy club whose members believe that an alien visitation has begun and they will serve as “midwives to the next brave new world.” Something big is brewing, in other words, and remote Wormwood seems to be its epicenter. Oppegaard skillfully weaves together this-worldly and otherworldly possibilities, crystal meth and Airstream trailers with nickel-iron space shards and flying saucers; he nimbly avoids tilting into either straight sci-fi or straight realism. Subplots about a student named Skull and Tyler’s brother, who went missing from a mall parking lot years earlier, also suggest exciting developments to come. But these sparks ultimately sputter and die of neglect, while Tyler and Anna never come alive sufficiently to justify their central position in the narrative.

As was the case with Oppegaard’s debut (The Suicide Collectors, 2008), considerable promise but poor follow-through.