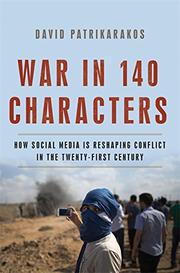 How Social Media Is Reshaping Conflict in the Twenty-First Century

“War, a virus, must mutate to survive.” So writes political journalist Patrikarakos (Nuclear Iran: The Birth of an Atomic State, 2012), who posits that in at least one manifestation of modern war, what matters is less boots-on-the-ground victory than which narrative about what’s happening emerges as the most convincing. In that regard, marketing, public relations, and counterintelligence become as critical as special ops forces. The author finds an example in his own experience in Ukraine as Russian separatists attempted to carve off a portion of the country as well as in a close study of the Islamic State group and other nonstate actors. This kind of warfare is nebulous, fought between nation-states and sometimes not easily identified enemies, and it often involves citizens, individually or in network; it is open-ended, and because of that, it is not easy to determine when and how victory or defeat can be declared. The great avatar of this new warfare, writes the author, is Donald Trump, who “employed Twitter as one of his primary campaign tools”—and continues to do so in office. “This is both a force for good,” writes Patrikarakos, “in that it brings greater transparency, and a force for ill, in that it is destabilizing.” Destroying any semblance of stability being the great desideratum of strongmen and terrorists alike, social media is now a much-used weapon in the modern arsenal. Traveling from “troll farms” in Russia to jihadi corners of YouTube, the author studies how social media is used to undermine truthful accounts of events, recruit radicals, sow confusion, and overturn old doctrines of warfare. “How do you defeat Islamic State,” he writes meaningfully, “when its demands are such that it can never be met?”

The great enemy of social media, it would seem, is any notion of objective truth. This eye-opening book reveals a theater of conflict that aims to destroy reality, waged by all sides.