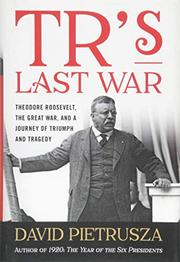 Theodore Roosevelt, the Great War, and a Journey of Triumph and Tragedy

A historical account examines Theodore Roosevelt’s quest to prepare the United States for its entry into World War I.

In 1915, the British ocean liner the RMS Lusitania was sunk by a German U-boat while making its way from New York to Liverpool, killing nearly 1,200 passengers. Roosevelt was enraged by this act of naval aggression and equally furious by what he considered President Woodrow Wilson’s pusillanimous response to it. Roosevelt became obsessed with preparing the nation for war, though the country had neither the men nor the supplies—and perhaps not the funds—for a protracted foreign engagement. Wilson opposed him bitterly and staked his presidency on the attractive combination of peace and prosperity. Roosevelt seriously contemplated a bid for the presidency in 1916, but the GOP was deeply distrustful of him as well as resentful given the way his failed third party bid in 1912 essentially ushered Wilson into office. Pietrusza (1960, 2018, etc.) powerfully captures Roosevelt’s frustration: “He wanted the presidency, craved vindication, fairly lusted for a chance to crush Woodrow Wilson and all his old enemies. But he knew that for all his heroism, he lacked public support, and that fatal defect preyed upon him.” The author provides a remarkably detailed account of the 1916 election and Roosevelt’s indefatigable push for military readiness as well as the emotional toll the war took on him—all four of his sons fought in it, and one lost his life. Pietrusza’s research is magisterially rigorous, swinging expertly from microscopic details to a vivid drawing of a more general tableau. The fulcrum of the book is Roosevelt’s capacious character: his near-comical obsession with the trumpeting of manly virtue, his thunderous economic populism, and his great sensitivity to loss—he had a “significant suicidal streak”—all somehow contained within one man. The author memorably contrasts the former president with Wilson, a man Roosevelt came to deeply loathe, a patrician academic who longed to disentangle the nation from Europe’s savage intramural disputes. Pietrusza clearly harbors an admiration for his subject but avoids any fawning hagiography, though one could argue his depiction of Wilson could be more generous. Further, the author adeptly tracks the transformation of the country’s mood, which gradually moved closer to Roosevelt’s sentiments: disdainful of Wilson’s intrusive foreign policy in the Americas but dispassionately neutral when it came to Europe. Pietrusza’s prose is sharply buoyant and transparent, and the story unfolds almost in novelistic fashion, presented as an electric contest of dominating wills rather than a dry recitation of historical facts. And while the author’s treatment focuses on the run-up to the war, he manages to paint a comprehensive view of Roosevelt’s life and the “sheer bloodlust” of which he was formidably capable. This is a fine scholarly achievement: psychologically searching, scrupulously devoted to accuracy, and dramatically gripping.

A captivating look at a singular American figure and the tumultuous history he helped fashion.