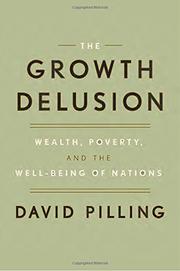 Wealth, Poverty, and the Well-Being of Nations

Of economic growth and its discontents—and of new ways to gauge all of them.

“Growth for the sake of growth is the ideology of the cancer cell,” the environmental curmudgeon Edward Abbey was fond of saying. One suspects that Financial Times associate editor Pilling would endorse the view, though he puts things less stridently in this studied look at economic growth and its measures and mismeasures. “Economics,” he writes, “can present a distorted view of the world.” True enough, especially because a sine qua non of modern economics is gross domestic product, a calculation of all the things that happen in an economy. But as the author memorably notes, GDP is morally indifferent: it “likes pollution,” because money is spent to clean up environmental messes, and “likes crime because it is fond of large police forces and repairing broken windows.” War and catastrophe? No problem, from a GDP point of view. Pilling examines some of the ways that renegade economists have proposed to consider the true health of an economy, with all the externalities of economic activity taken into account, from various equations to happiness rankings to the Genuine Progress Index, one of the more interesting “measures of economic welfare.” Refreshingly, the author’s approach does not require much background in economics, though a little familiarity with some of its key concepts would be helpful. He writes clearly about such new approaches as trying to enumerate the “services” nature provides—by which we can ponder what the survival of bees is worth, given their contributions to pollinating crops, and can think about the “existence value” of the great apes. Throughout, Pilling presses the point that the economy, as he writes, “is not real” but instead is shorthand for talking about trillions of transactions; in the same way, GDP “is just a clever way of measuring some of the stuff that we humans get up to.”

A fresh, lightly written look at issues noteworthy for their complexity; just the book for the budding economist in the house.