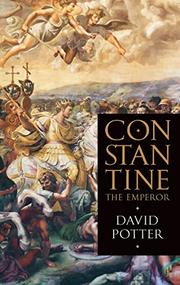 Scholarly biography of the legendary Roman emperor “best known as the [man] who converted to Christianity and in so doing made it possible for Christianity to become a world religion.”

With Diocletian’s abdication in A.D. 305, Constantine’s troops acclaimed him as caesar. He preserved the idea of territorial caesars who spoke and acted in his name, but only he was supreme emperor. Here, halfway into the book, Potter (Greek and Roman History/Univ. of Michigan; The Victor's Crown: A History of Ancient Sport from Homer to Byzantium, 2011, etc.) finally begins the history of the man and his great governing successes. Constantine protected Romans in their concerns for fairness, marriage stability and personal standing, and he promoted efficiency throughout the empire. He had no use for patronage and abuse of the poor by the wealthy, and his decision to move the capital to Byzantium was as much a military decision as it was a reflection of his desire to establish his own eponymous shrine. It’s unclear when Constantine converted from Roman deities to one God, but it’s certain he ruled as a Christian emperor even though he was not baptized until he was on his deathbed. His First Council of bishops at Nicea cleverly united Christians through an administrative, not theological, process. That council’s accomplishments are still felt today; it addressed the controversy over consubstantiation, defined the date for Easter and provided the Nicene Creed, which is still in use today.

A good fit for academics and students of Roman history. General readers will need to work to keep the players and locations straight and patiently wait for the main attraction.