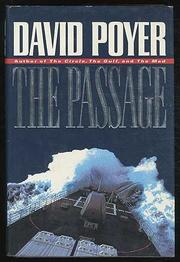 In his fourth adventure (The Circle, 1992, etc.), Lt. Dan Lenson busily battles spies, computer hackers, pirates, thieves, a gun-crazy right-wing libertarian, and his own personal demons. Not to mention his shock at learning that there are gays in the navy. Poyer (Louisiana Blue, p. 171) somehow makes all of this silliness work. Lenson is serving as weapons officer aboard the newly commissioned Barrett, a sophisticated destroyer with a new, top-secret automated combat direction system. The vessel's near- disastrous computer failures are revealed as the handiwork of a spy who attempts to turn the ship over to the Russians and Cubans while on test maneuvers in Guant†namo Bay. At least two men die during the scheming: One is a supply officer whose apparent suicide implicates him in the mysterious disappearance of equipment worth hundreds of thousands of dollars; the second is a handsome young seaman—also an apparent suicide—whose diary indicates that he was having sexual relations with Commanding Officer Thomas Leighty, a family man with an impeccable record but a less-than-butch manner that makes him the subject of rumor—and a naval intelligence investigation. The missing supplies and equipment, the deaths, the computer malfunctions are all connected to an eventual mutiny led by the spy. Bitter over a recent divorce, struggling against the bottle, haunted by an earlier tragedy at sea, Lenson nonetheless manages to foil the dastardly plot. He also learns that a person's sexual orientation has nothing to do with honor or courage. Poyer patches in a sappy, jingoistic subplot about a pregnant woman's escape from the horrors of Castro's Cuba, but otherwise handles the convoluted storyline with professionalism. Lingo-laden and slow to develop, but notable for a sensitivity and scope lacking in other, more popular modern sea adventures.