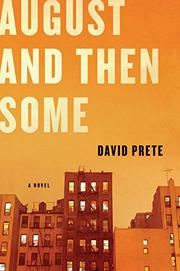 AUGUST AND THEN SOME

An intense, tragic story about a young man’s struggle to take control of his life.

JT Savage lives in a working-class New York City neighborhood and has a job lifting rocks. When he turned 12, his dad took him to a barroom and got him into the middle of a fight involving a pool cue. Now his younger sister Dani relates poorly to the world, for a dark reason he completely understands. Dad is a drunk and worse, and Mom is feckless. How can JT repay the old man for an awful hurt he’d inflicted on a member of his family? He and his potato-headed friend Nokey decide to steal JT’s father’s 1965 Shelby Cobra and sell it. Meanwhile, JT witnesses a Dominican girl named Stephanie in the process of getting herself pregnant. Later her boyfriend abandons her, and JT is there to help—but their relationship is not what the reader might expect. JT himself doesn’t fit an easy stereotype. If there is one thing he wants in life it’s to not be like his father, yet it wouldn’t take a strong push in that direction to spoil his chances forever. Can he protect both Dani and Stephanie, give Dad his due and stay out of jail? His boss respects his hard work, but will JT be hauling rocks for the rest of his life? As JT might put it if he were prone to self-pity, he has a big f*ing challenge ahead. The language in this first-person account fits his upbringing: Without all the F-words the book would be a couple of pages shorter. But the dialogue crackles like a plastic bottle underfoot while the pace never slows.

A disturbing novel offering a mixture of hope and despair, vileness and nobility.