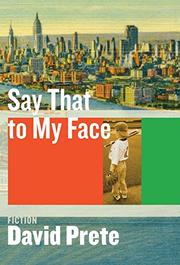 SAY THAT TO MY FACE

In a heartfelt first collection, Prete follows a good-looking Italian-American kid from Yonkers as he struggles to understand himself and his surroundings.

It’s 1975, and in the opening story, “No King, No Puppy,” Joey Frascone is a four-year-old living with his grandparents, his adored older sister, and his young divorced mother, who works in a department store. He’s just a kid, but he’s also precocious and confused at his changing world and his mother's relationship with a shady character who beguiles her children with promises of a house with a swimming pool. With each story, Joey grows older and more aware of the people and world around him, realizing during the turmoil of the Summer of Sam that the Gallagher girl from down the street has a crush on him, and that his father is behaving inappropriately when he lectures him, at eight, on the sexual differences between men and women. But Joey Frascone as a small boy is only mildly convincing. It’s when he reaches adolescence, in “Self Respecting Neapolitan,” that the collection gathers power. Here, he’s struggling to become a man, establish his independence, and to understand love when his first girl flees her abusive family and leaves for Phoenix. Joey is rebellious and yes, charming, when, lured by the New York City skyline, an Oz that glitters in its unattainable splendor, he ditches high school for a road trip with two buddies in “After We Left Yonkers.” His quest for success and experience continues with a trip to Jamaica to smuggle drugs and a bittersweet meeting in a bar with an older woman from the neighborhood. Prete aptly draws Joey in all his posturing and hesitant glory. “We were easy on the eyes and that carried a lot of weight in our neighborhood, but we had sense enough to know that if we were to be put in a room full of truly beautiful people, we would be asked to leave.”

Portrait of a suburban Italian-American as a young man.