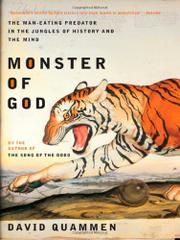 A somber elegy for the last of the world’s “alpha predators.”

Big, fierce beasts have haunted the human mind since time’s beginning, writes natural historian Quammen (The Boilerplate Rhino, 2000, etc.), and the relationship between predatory mammals and their human prey “has played a crucial role in shaping the way we humans construe our place in the natural world.” He’s surely on to something: given that the natural tendency of humans is to exterminate any predators that threaten them—indeed, some would argue that exterminating them is “basic to the enterprise of civilization”—then it makes sense that our species should have been so hell-bent for so long on reshaping and taming the environments where nasty critters hang out. In a narrative that is better controlled and less footnote-heavy than The Song of the Dodo (1996), Quammen travels to tropical places, wild and on the verge of being tamed, to observe alpha predators in action. He delivers wonderfully wrought, undeniably scary tales of 13-foot-long Nile crocodiles in whose bellies reside the pulped remains of unfortunate Turkana villagers, people who consider their hunter “the punishing agent of a capricious God who was by turns benevolent and vindictive—like the Lord in the book of Job, only worse”; of Siberian tigers whose kind once stalked the inhabitants of the taiga, but that have since been hunted nearly to extinction, ever more rapidly since the end of the Soviet Union and the arrival of a particularly rapacious form of capitalism; of embattled Indian lions and their more adaptable fellow jungle denizens, leopards, far more adaptable to “degraded habitats, forest edges, and agricultural intrusions into wild landscapes.” Scary, yes, but for Quammen the real fright is in a future in which a world of ten billion humans can find no room for such keystone species—a world that he fears is approaching all too close.

Another good and provocative work from Quammen, sure to engage past admirers and earn new ones.