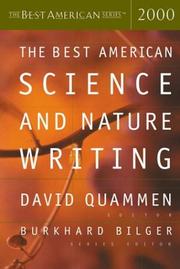 An admirable attempt—the first in a series—to put some of the best new ideas in science into one volume.

Outside columnist Quammen states his bias up-front: science is a human activity, an aspect of our culture. It’s a proposition that, taken at face value, is undebatable; but as a criterion for assembling this collection, it inevitably skews the choice of materials toward such selections as Wendell Berry’s “Back to the Land” (an apologia for the agrarian movement) or Paul de Palma’s “http.www.when_is_enough_ enough?.com” (a sober and long-needed challenge to the notion that every user needs the newest and fastest computer on the market). Such anti-materialist points need to be made, and the authors make them eloquently. Nor is it any great surprise to find an anthology aimed at a popular audience putting the emphasis on the biological sciences and on health issues: Natalie Angier, for example, takes on the myth that men are by nature more promiscuous than women; Richard Conniff gives us a look at the social structure of an African dog pack; and Richard Preston warns of the dangers of biological warfare. Each piece is well written, and each will have many readers nodding at the authors’ insights. But readers interested in the physical sciences are likely to feel shortchanged. Are there no writers on astronomy or physics as eloquent as Berry? One suspects that the editor’s bias has led him away from those branches of science, represented only by Gary Taubes’s exposition of the newest wrinkles in string theory, which closes the volume. And a more creative editor might have grouped essays to create dialogues among the various writers, rather than printing them in straight alphabetical order.

Readable and thought-provoking, if flawed by its underemphasis on the physical sciences.