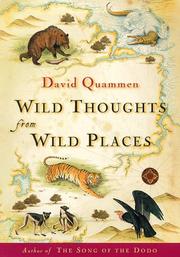 This culling of columns and magazine pieces penned for Outside, Rolling Stone, and Powder over 15 years reveals no damping of his passion for nature, no failure of nerve in testing his skills in the wild, and no stinting in his admiration for the pros—scientists, athletes, and others—he has encountered. In short, connoisseurs of the Quammen (The Song of the Dodo, 1996) style will relish the daredevil you-are-there writing of the sportsman: kayaking on class V rivers with near-death encounters with ``holes'' (vortices) and boulders, trekking a high moor in Tasmania, documenting telemark races—in which skiers slalom, skate, jump, and perform the absurdly difficult telemark turn (named after a town in Norway)—not to mention trout fishing in Montana. Trout is why he lives there, he says, using a word he loves, ``synecdoche,'' meaning that trout is emblematic of a lot more than trout, so to speak. Even armchair athletes who think whitewater rafting is machismo gone amok may derive some vicarious thrills from Quammen's perfect recall of danger. Elsewhere there are nostalgic pieces about growing up in Cincinnati with a tree as a friend (along with some lore on how trees cope with stress) and his current war with the Cincinnati zoo because of its exploitation of white tigers (inbred for their mutant genes). There are paeans to urban pigeons as ``superdoves'' and to the late Edward Abbey and one of his books in particular, Desert Solitaire. The personal and sentimental figure in essays on family, friends, and spouse. Sprinkled throughout are bits of scientific lore about the elements—water, snow, ice, glaciers, avalanches; about disease—emerging scary viruses and cancer; and sundry critters, barnacles and swallows, for example. The link seems to be whatever engages the soul of the wanderer ready to backpack and laptop his adventures in technicolor prose. (Have synecdoche, will travel.)