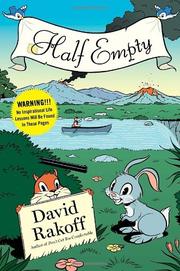 “Positive emotions may, of course, relate to good things,” writes This American Life contributor Rakoff (Don’t Get Too Comfortable, 2005, etc.), “but there is no necessary relationship.” Throughout the book, the author hones in on this disconnect, debunking the myth of the power of positive thinking while arguing that “the bleak” (not the meek) will most likely inherit the earth. Rakoff manages to make pessimism sexy, whittling optimism into little more than an irresponsible fad, a modern opiate of the masses. While his first essay confronts this issue directly, the remaining pieces explore similar terrain. His subjects range from kosher diets and dying therapists to the author's own struggles with cancer. On occasion, Rakoff's work reads like off-the-cuff freestyle riffs, though most readers will trust him to return to his work's primary cause, even if he does so by the most circuitous route. The author regularly employs non-sequiturs as a literary technique, casting his arguments to the fringes of possibility before reeling them back in. His droll humor proves an asset when describing humankind's failures, allowing readers to roll their eyes while empathizing with the argument. After being ordered to read 2,000 manuscripts as part of his duties as the low man on the totem pole at a publishing house, he wearily admits, “They asked me to eat shit, and all I did was request a bigger spoon.” While Rakoff seems to revel in his role as a modern-day Thomas Hobbes, it’s evident that he remains responsible in his critique, never trouncing a subject without provocation while simultaneously opening the reader's eyes to everyday lunacy.

An unsentimental comic depiction of our inability to recognize our own short-sided logic.