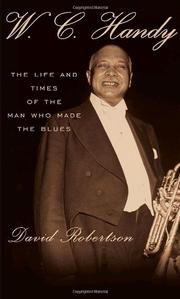 The Life and Times of the Man Who Made the Blues

Poet and biographer Robertson (A Passionate Pilgrim: A Biography of Bishop James A. Pike, 2004, etc.) takes the measure of musical giant W.C. Handy, composer of such classics as “The Memphis Blues” and “Beale Street Blues.”

Born in northern Alabama eight years after the surrender at Appomattox, W.C. Handy died the year Elvis entered the Army. At the outset of his lengthy career, this talented cornet player aspired, against the wishes of his minister father, to become “the colored Sousa,” a leader of brass-band music. He became much more. Blending African-American folk-blues melodies “with ragtime and his own distinct notation,” he fashioned the blues into a publishable, commercially successful form. Robertson revisits each stage of Handy’s career: his years as the music director of various fraternal organizations, as the leader of dance bands; as a college music professor; and, most revealingly, as a performer and director on the minstrelsy circuit, where he encountered virtually every form of popular music. The author effectively demonstrates how by 1904 Handy was uniquely poised to turn folk blues into a commodity for a national audience. Handy corralled the notoriously improvisational blues, snatching folk melodies for his compositions and making the “blue note,” unexpected minor and flatted notes, his signature. Robertson stoutly defends Handy against attacks by Jelly Roll Morton and other partisans of the New Orleans tradition, noting that in his time, Handy’s Memphis strain of blues was every bit the equal of anything emanating from the Crescent City, and surely the public’s favorite. If Robertson never quite nails Handy the man—the author includes scant information about Handy’s philandering or the blindness that afflicted half his life—he supplies plentiful details about the career, the timeless blues compositions, the groundbreaking publishing company Handy established and the composer’s late-life attention to spirituals.

A solid appreciation that restores Handy to his rightful place in America’s music pantheon.