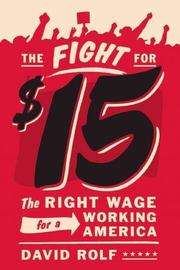 THE FIGHT FOR FIFTEEN

The Right Wage for a Working America

An expert exploration of a provocative blueprint for rescuing the American middle class through the creation of a new living wage.

When New York City fast-food workers first walked off the job in the fall of 2012, power brokers nationwide roundly derided their calls for a $15-per-hour minimum wage as nothing more than pie-in-the-sky prattling. "God bless them—shoot for the stars,” said New York State Gov. Andrew Cuomo after the assembly finally moved to take action. But the spark that those hard-pressed workers ignited would not be limited to New York. Soon, struggling workers in the Pacific Northwest were also spurred to action—first in modest SeaTac, then in Seattle, where the drive for the higher minimum wage finally hit pay dirt. In this comprehensive analysis of the Fight for $15's earliest challenges, Rolf, the president of the Service Employees International Union 775, provides true insight into the competing forces that ultimately yielded one of the most important victories for organized labor in decades. The author’s plainspoken approach and stellar scholarship illuminate in-depth discussions about the deliberate policy decisions that began to decimate the middle class at the start of the 1980s as well as the insidious new ways in which big business continues to attack American workers today via stagnant wages, rampant subcontracting, unpredictable scheduling, and other detrimental practices associated with the so-called “share economy.” Ditching moldy, Reagan-era dogma for a fresh “middle-out” approach, Rolf looks beyond traditional unionism for new ways to empower workers through collective action. Self-avowed venture capitalist “gazallionaire” Nick Hanauer is on board. “ ‘The fundamental law of capitalism,’ he argues, is that ‘if workers have more money, businesses have more customers. Which makes middle-class consumers, not rich businesspeople like us, the true job creators.’ ”

A savvy inside look at the social movement challenging decades of stark economic decline.