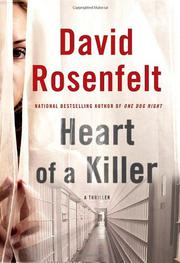 HEART OF A KILLER

A lawyer who’s never tried a criminal case suddenly finds himself with the world’s unlikeliest pro bono client: a woman convicted of murder who demands the right to end her life so that she can donate her heart to her dying daughter.

New Jersey doesn’t have the death penalty, so there’s no way Sheryl Harrison can be legally executed for the murder of her husband Charlie, even though she confessed at the scene six years ago. Once her request finds its way to about-to-be-fired associate Jamie Wagner, however, he’s so smitten with the woman who calls him “Harvard” that he instantly starts doing his best to make her wish come true. Jamie does get Sheryl taken off suicide watch, but the New Jersey State Prison for Women insists on keeping her alive despite her fervent wishes. There’s only one dim hope: that Jamie can get her original conviction overturned so that the woman he loves can go home and kill herself. After all, Newark police detective John Novack has never been entirely convinced of her guilt even though he’s the one she confessed to. As these unlikely allies go forth on their quixotic mission, Rosenfelt presents tantalizing glimpses of the criminal mastermind they’re up against: domestic terrorist Nolan Murray, a computer hacker who’s prepared to cause high-casualty havoc throughout the nation’s tech-dependent transportation and energy sectors if his extortion demands aren’t met. What this monster has to do with Sheryl’s plight, and whether Jamie will be able to fulfill her wishes and bid her farewell, are questions Rosenfelt answers with all his accustomed dexterity (On Borrowed Time, 2011, etc.).

Warmhearted, satisfyingly inventive and almost too clever for its own good. Why isn’t Rosenfelt a household name like Michael Connelly and Jeffery Deaver?