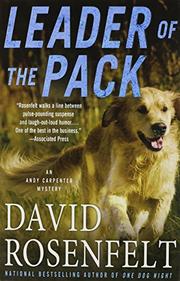 LEADER OF THE PACK

Dog-loving Andy Carpenter, Paterson, New Jersey's gift to the criminal bar, gets another chance at a murder case he lost six years earlier.

Not even Joey Desimone disputes that his father, Carmine, runs one of central New Jersey’s dominant crime families, or that Joey carried on an adulterous affair with Karen Solarno, or that he was angry and hurt when she broke it off to give her marriage another shot. But Joey vigorously disputed prosecutor Dylan Campbell’s accusation that he rang the Solarnos’ doorbell and gunned down Karen and her husband, Richard. Despite Andy’s best efforts, Joey’s story didn’t sway a jury of his peers, and he’s already done six years of his life sentence when Andy, following an unwitting tip he’s gotten from Carmine’s aging brother and enforcer Nicky Fats, realizes that Richard Solarno was up to his gizzard in gunrunning and that a group of his clients, paramilitary survivalists who deemed a shipment he supplied short on firepower, had threatened his life—facts that Lt. Kyle Wagner of the Montana State Police not only knew, but duly reported to Dylan Campbell six years ago. Even Henry “Hatchet” Henderson, the irascible judge who seems to preside over all Andy’s trials (Dog Tags, 2010, etc.), acknowledges that the prosecution’s concealment of such exculpatory evidence constitutes grounds for a new trial. If only the trail weren’t so cold—and cooling further every day, thanks to the executions of Nicky Fats, Carmine and associates as far away as Peru at the hands of Simon Ryerson, a Harvard MBA who thinks the time is ripe for a hostile takeover of the Desimone empire and doesn’t mind stepping on Joey’s toes in order to close the deal.

The mob intrigue, as is customary with Rosenfelt (On Borrowed Time, 2011, etc.), is unconvincing, and, despite the title, there’s not much for dog fanciers this time around. But Andy is as effervescent as ever, and the courtroom byplay is consistently entertaining.