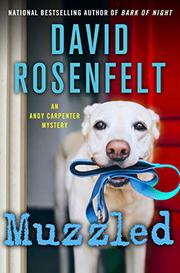 Paterson’s laziest lawyer, Andy Carpenter, is dragged from sort-of-retirement back to sort-of-work by one of the world’s most unlikely dog lovers.

Weeks after three top employees of Pharmacon—Alex Vogel, Stephen Mellman, and Robert Giarrusso—are blown up aboard Vogel’s boat off Long Beach Island, speech therapist Beth Morris, whose obsessive hobby is reuniting lost dogs with their owners, gets a phone call from Daniel Simmons claiming ownership of Lucy, a yellow Lab Andy’s Tara Foundation has been sheltering. That would be perfectly normal and even great news if Beth didn’t recognize Simmons’ voice as that of Alex Vogel. At a hastily arranged reunion with Lucy, Vogel admits he escaped the blast that destroyed his boat after the two colleagues who’d been planning to launch a new company with him had already been shot. Not surprisingly, he’s arrested for their murders, leaving Andy with an awful lot of circumstantial evidence to explain. Since Rosenfelt obligingly identifies the real killers as Charlie Phillips and Orlando Bledsoe and since Vogel had recently been dating Carla D’Antoni, the late girlfriend of premier New Jersey mobster Joseph Russo Jr., the only mystery is what pharmaceutical secret provided the motive for the murder. And even that secret is broadly hinted when Pharmacon Founder and CEO Eric Buckner tells Andy that the company’s on the verge of releasing Loraxil, a medication for antibiotic-resistant infections. The resulting complications will appeal mainly to readers sheltering in place over their fears of other infections today’s headlines might have told them about.

One of Rosenfelt’s least suspenseful cases despite its unsettlingly serendipitous relevance to the COVID-19 pandemic.