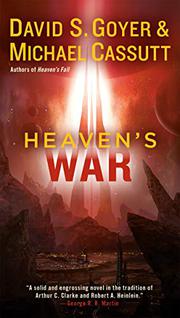 In 2019, two competing space missions landed on Keanu, which turned out to be a vast alien vessel. Despite their advanced science, Keanu’s Architects have a problem they can’t solve and need humanity’s help. Neither of these expeditions made much headway, so the Architects snatched up a random selection of people from their respective mission HQs (in Houston and Bangalore) and deposited them in Keanu to join marooned NASA mission commander Zack Stewart. So they must learn how to survive here and explore their surroundings in the hope of learning why they’ve been summoned. There are some complications: Some of those killed in the previous book don’t stay dead, but return as “revenants” with a mental hotline to the Architects; and an alien, the Prisoner, trapped for hundreds of years, escapes and encounters one of the human exploring teams—but his motives are unclear. The action-adventure sequences, as the various exploring teams blunder from cliffhanger to cliffhanger, keep the pages turning at a good clip. And the rest, plot absurdities notwithstanding, would be far more likable if it had been less obviously designed for future movie-dom, with sound-stage interiors, screenplay-crisp dialogue, a steady drip-drip of revelations, the ticking clock (Keanu is departing for parts unknown), the occasional death and the teams selected for wide appeal from such stock characters as the young girl (Zack’s daughter), the dog (a revenant), the crippled ex-astronaut, the dying black guy, the Chinese spy, the science fiction writer, the Indian guru, etc.

Brisk and efficiently engrossing, and as substantial as bubbles.