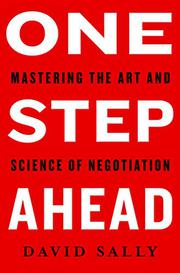 Mastering the Art and Science of Negotiation

How to become “a mindful, sophisticated negotiator.”

Behavioral economist Sally, a veteran teacher of negotiations at Cornell and Dartmouth, goes beyond his two favorite books on the topic—How To Win Friends and Influence People (“not scientific”) and Getting To Yes (“limited”)—to explain how “becoming an analytical observer of the people around you” is the path to more effective negotiation. In this appealing, well-written book, he covers the skills and moves of outstanding negotiators, who “read” their counterparts, react, and create winning outcomes. The single most important factor for successful negotiators, writes the author, is toughness—not belligerent but rather determined and focused. Thorough preparation is critical. Advanced practitioners multitask, “practice, practice, practice,” and exhibit Edgar Allan Poe’s qualities of a con man: “minuteness, interest, perseverance, ingenuity, audacity, nonchalance, originality, impertinence, and grin.” They are “Machiavelli-esque,” combining concepts from game theory with insights from social psychology. Sally draws on a wonderful array of sources to illustrate his points, including beauty contests, TV wrestling, sociologist Erving Goffman’s insights into “framing negotiation as a drama,” John Steinbeck’s Grapes of Wrath, the Korean armistice talks, and U.N. diplomat Gianni Picco’s preparations for his early 1990s negotiations to free Western hostages in Lebanon. Whether discussing the advantages of a Columbo-like “surface incompetence” or of changing a bargaining persona “as if it were a mask,” the author fully explores the nuances of interactions. He also celebrates Richard Holbrooke’s winning “performance” during talks to end the Bosnia conflict, when the American diplomat’s troubled expression forced counterparts to ask, “What is it?” and Holbrooke said, “I’m worried. I don’t know if it’s going to work.” There are detailed chapters on key aspects of negotiation, from drama, acting, and performance to fairness, gender, and emotions.

Not a quick read like many similar books but rather a deep, thoughtful master class on the “negotiation game.”