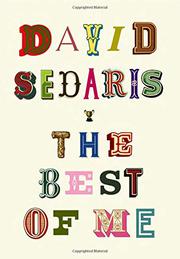 THE BEST OF ME

A welcome greatest-hits package from Sedaris.

It’s not easy to pick out fact from fiction in the author’s sidelong takes on family, travel, relationships, and other topics. He tends toward the archly droll in either genre, both well represented in this gathering, always with a perfectly formed crystallization of our various embarrassments and discomforts. An example is a set piece that comes fairly early in the anthology: the achingly funny “Me Talk Pretty One Day,” with its spot-on reminiscence of taking a French class with a disdainful instructor, a roomful of clueless but cheerful students, and Sedaris himself, who mangles the language gloriously, finally coming to understand his teacher’s baleful utterances (“Every day spent with you is like having a cesarean section”) without being able to reply in any way that does not destroy the language of Voltaire and Proust. Sedaris’ register ranges from doggerel to deeply soulful, as when he reflects on the death of a beloved sibling and its effects on a family that has been too often portrayed as dysfunctional when it’s really just odd: “The word,” he writes, “is overused….My father hoarding food inside my sister’s vagina would be dysfunctional. His hoarding it beneath the bathroom sink, as he is wont to do, is, at best, quirky and at worst unsanitary.” There’s not a dud in the mix, though Sedaris is always at his best when he’s both making fun of himself and satirizing some larger social trend (of dog-crazy people, for instance: “They’re the ones who, when asked if they have children, are likely to answer, ‘A black Lab and a sheltie-beagle mix named Tuckahoe’ ”). It’s a lovely mélange by a modern Mark Twain who is always willing to set himself up as a shlemiel in the interest of a good yarn.

One of the funniest—and truest—books in recent memory and a must-have for fans of the poet laureate of human foibles.