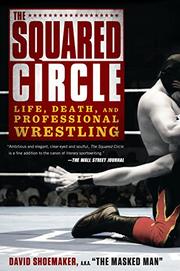 No, it’s not a KISS reunion, but instead the world of pro wrestling. Of course it’s fake; early on, Shoemaker introduces readers to the insider term “kayfabe,” which refers to “the wrestlers’ adherence to the big lie, the insistence that the unreal is real.” Consider this scenario: “Ravishing” Rick Rude insults a woman at ringside. She just happens to be married to Jake “The Snake” Roberts, one of Rude’s many bêtes noires. The Snake vows vengeance, while Rude places her image on various strategically located parts of his costume. Kayfabe? You bet, even if Shoemaker quietly goes on to describe how the whole Snake/Rude show “underscored the fundamentally homoerotic nature of the enterprise.” Good thing André the Giant isn’t around to ponder such possibilities, but he remains a hero of the narrative—and, for all the oddness of wrestling and the avariciousness of some of the men behind the curtain, Shoemaker finds in its narratives a bit of the old Joseph Campbell hero quest, as when, once upon a time, the Macho Man set down the burden of evil and shook hands with Hulk Hogan, whereupon his “transformation into good guy was complete.” The possibilities for hipster irony are endless in the fundamentally unironic display that is wrestling, just as in NASCAR or pro bowling, and Shoemaker is respectful even as he looks behind that very curtain to see how the odd dreams of pro wrestling and its discontents are shaped. A hint for would-be practitioners: It helps if you’re, yes, a giant in “a playground for literally outsized men to act out metaphorically outsized tropes and storylines for the technological gratification of the masses.”

Put Greil Marcus and Susan Sontag ringside, and you get something approaching this book. A little too postmodern at times but an eye-opener.