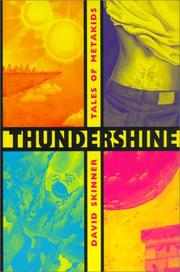 In a well-written gambol through weirdness, Skinner (The Wrecker, 1995, etc.) offers four highly imaginative short stories about young people with supernatural powers. In the first story, Jenny can change the world, and change history, by changing the maps she draws. The narrator, Laurie, knows Jenny is out of control, and when Jenny creates a second sun and splits the earth in two, Laurie is ready to act. The second story is about a world where people “bop”—instant travel just by thinking of a location—instead of walking from one place to another. Mae, however, either can’t bop, or won’t, a prospect that intrigues the narrator. In the third tale, Meredith, who has a supernatural connection with the planet Pluto, and Dexter, who is able to spray-paint with his mind, unite their powers. In the fourth and longest story, Jake finds himself deeply in love with a religious girl, Louise, and both of them are tempted by the powers a metahuman, Nina, has bestowed upon them. All four stories will captivate readers, and may even get them thinking about deeper ideas. Skinner’s often humorous portrayal of young adolescents is on target, and while the stories resemble writing exercises, lacking the sustained, pulse-pounding poetic turns of his novels, they are consistently entertaining. (b&w illustrations, not seen) (Fiction. 9-14)