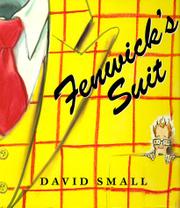 A punny cautionary tale about a nondescript office drone who mistakenly believes that the clothes make the man. Bored, friendless, and invisible in his busy city office, Fenwick studies a magazine and decides, ``Maybe it's the way I'm dressed.'' At a tailor shop, he happens upon a bright yellow suit with a windowpane check; once dressed, Fenwick begins to strut with self-confidence. In fact, the suit wears him out. The next morning, it leaves for the office without him. On the third day, Fenwick follows his suit to the office and discovers just how insignificant his role is in the suit's fabulous life. Determined to capture his wayward clothing, Fenwick gives chase through the streets: ``Legging it up the street the suit threaded its way through the crowd . . . Fenwick collared [it] . . . and hemmed it in, but just when he thought he had things all buttoned up, the suit cuffed him back. Both were panting for breath.'' In a spectacular finale, Fenwick escapes the suit's clutches, returning to his dull life sadder but no wiser. Small (Hoover's Bride, 1995, etc.) renders extraordinarily witty watercolors of a bristling, bustling New York City and a suit that just won't quit. It's too easy to deem this book—with its puns and wry tone—as aimed at adults; the plot depends on readers believing that having an animated suit is a problem. Actually, it looks like fun. (Picture book. 4-10)