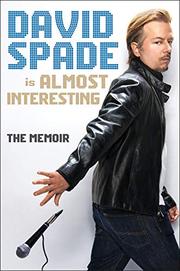 The story of how a "white trash troublemaker" from Scottsdale created a successful career as a comedic supporting character in TV and movies.

In his first book, Spade details the years before the fame—feeling ashamed to borrow money from friends, crashing on their couches in Los Angeles and New York, accepting low-paying gigs at comedy clubs—and his disappointment even after getting the plum job for which he is perhaps best known: a cast member on Saturday Night Live. He started out as a "lowly writer/performer,” not an on-stage performer, a position he craved, and he explains how he often he felt he was “legitimately in over my head.” Nonetheless, Spade remained in the writers' room, frustrated as he was “punching up sketches that I wasn’t in (sour grapes alert).” It took several seasons before he finally found his voice as an important recurring character: the sarcastic Hollywood correspondent on the show’s "Weekend Update” segment. The author educates readers on the mechanics of putting together a weekly, 90-minute, live comedy show—e.g., why the sketch that closes the show is dubbed the "5-to-1"—and his anecdotes about the show’s hosts and musical acts are mostly amusing. His kinship with fellow SNL cast member Chris Farley remained strong throughout their shared, blockbuster movie career—though the author devotes only a short chapter to Farley's premature death. In recounting his adolescence, Spade recalls that he wasn't the class clown: "I wasn't the loud attention getter.” Curiously, the author provides scant acknowledgment of his TV work on Just Shoot Me! and Rules of Engagement, and he barely mentions his nominations for several industry awards. He does, however, provide copious, often crude accounts of his disappointments with his early sex life—and his successes later on.