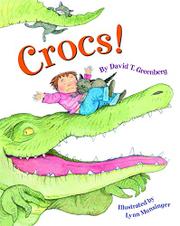 Greenberg has mellowed some since the gleeful grotesqueries of his glorious Slugs! (1983), but his penchant for creatures creepy and crawly hasn’t abated a jot. Having survived Bugs! (1997), Skunks! (2001) and Snakes! (2004), the stolid young hero decides to eschew the terrors of the city and take a vacation to a tropical island. Unbeknownst to him, the island he has chosen is quickly swarmed by crocs of every size and mannerism. Fortunately these are friendly reptiles, and even when the island itself is revealed to be a gigantic croc on its tummy, the boy is still crowned king (in a rather Sendakian twist), and everything is swell thereafter. The bouncy verse emphasizes the wry while Munsinger’s pictures lighten some of the tale’s darker elements, making for a perfect mix of scary and fun. For fans of the pair’s previous books, this title will offer much of the same with a sweet edge entirely its own. (Picture book. 4-8)