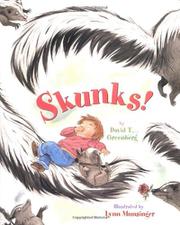 Master of revulsion Greenberg (Bugs, not reviewed, etc.) takes on skunks, to the merriment of his audience. "The stunkiest stank ever to stink / The stankiest stink to stunk / Far worse than a moldy garbage can / When you reach down and scoop out the gunk." Yes, the unforgettable stink of a skunk. Munsinger (Tacky and the Emperor, 2000, etc.) traipses right along behind Greenberg, following his every move, sharply animating her characters. Her colors are muted to the point of appearing washed out, so it takes the facial expressions and the comic scenarios to carry the page. Note particularly the double-paged spread of a wedding scene filled with skunk guests, a bed made completely of piles of the fuzzies, or the slapstick squirrel that's been zapped. Greenberg's scuzzy humor, on the other hand, never flags: "But the stink of a skunk / I always have thunk / Is more than a sweet bouquet / There are numerous other things (that a punk) / Can do with the heavenly spray." And he goes on to enumerate them in great detail and at the expense of sounding like a one-note song. There are times that his inventiveness fails him—“Skunks make superior sprinklers / For watering your grass" and "A hovercraft of squirting skunks / Take it for a ride" are particularly desperate—yet mostly Greenberg manages to make the fragrant nightlifer an object of mirth and high-spirited language. (Picture book. 4-8)