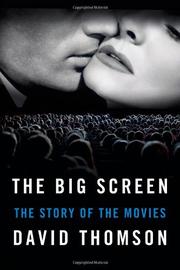 The Story of the Movies

Thomson (The Moment of Psycho: How Alfred Hitchcock Taught America to Love Murder, 2009, etc.) brings his encyclopedic knowledge of film and idiosyncratic, allusive style to bear on this ambitious consideration of the history of motion pictures and their effect on the audience.

The author goes beyond mere survey and analysis to question what movies mean to us and how they have shaped our perceptions and beliefs. Thomson chronicles the development of movies from Eadweard Muybridge’s 19th-century photographic experiments to the phenomenon of Internet pornography. Along the way, he explicates the excitement and politically fraught evolution of Soviet cinema, the provocations of the European New Wave, the allure of film noir and the world-shaking product of Hollywood, but the author makes no attempt to give a comprehensive or strictly linear history of the medium. Thomson is more interested in making striking connections, looking deeply at particular films, such as Brief Encounter (a surprising subject for such intense scrutiny and indicative of Thomson’s iconoclastic bent) or the TV landmark I Love Lucy, to pursue the central question of his history: What does life in front of screens do to us? Thomson’s approach is lyrical and questing rather than academic; the book is accessible to anyone with more than a passing interest in the subject, written in a distinctive voice, learned and authoritative without pedantic dryness and touched with wonder and trepidation at the primal power of the image. Readers familiar with the author’s Biographical Dictionary of Film will be happy to note that Thomson’s beguiling knack for capturing the essences of our movie icons in poetic or provocative asides has not diminished, and the scholarship on display is first-rate. However, the heart of this unique overview is the author’s ambivalence about the power we grant those shadows on the wall.

A profound and richly satisfying reckoning with the movies and what they mean.