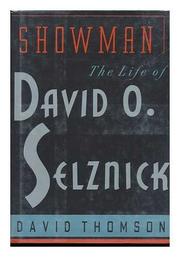 The Life of David O. Selznick

Brilliant, immense life of the producer of Gone With the Wind, smartly done by film-historian/novelist Thomson (Silver Light, 1990, etc.). Thomson has done stunning research for this labor, and interviewed everyone of importance regarding David O. Selznick (1902-65), aside from Jennifer Jones, Selznick's second and last wife, who clammed up. Jones could have added much but, going by her portrait here, it's understandable that she's still the publicity- shy, shivering creature she was when Selznick first met her—and there's the weight of having parted him from first wife, Irene Mayer Selznick (who told her side in 1981's A Private View). The arc of Selznick's life—from teenage go-getter following his father and older brother into the movie biz to huge success in his middle 30s and then to a long, unstoppable decline—gives a great boost to the opening half of this bio, though the fizzle of Selznick's later career drains the book's energy later on simply because Selznick became a dully compulsive memo-writer, talker, gambler, and egomaniac, out of touch with the times and rambling from one deep pit of debt to another. Selznick spent much of his time addicted to Benzedrine, drank enough and lost enough money gambling to stay embattled with both wives—sometimes bruising Jennifer—and made great use of his producer's couch with actresses, starlets, secretaries, and even messenger girls: not a likable guy, except to well-heeled friends like Jock Whitney and Bill Paley. Selznick also publicized himself as Hollywood's greatest translator of great books to film, although he seldom read anything but synopses and scripts. Thomson sees him not just warts and all but as a puppet to the women in his life, whose neurotic needs kept him chained up like a dancing bear. Pretty much a spellbinder, with a pathetic third act, despite Thomson's keen analyses of Selznick's glossy films and long fade- out. (Photographs—108—not seen.)