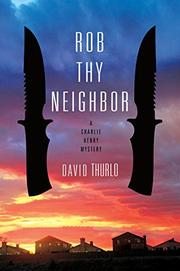 Albuquerque is as dangerous as Afghanistan for two Army buddies.

Gordon Sweeney and Charlie Henry are enjoying a barbecue with police sergeant Nancy Medina and her life partner, lawyer Gina Sinclair, when all hell breaks loose at the house across the alley. Shots and screams bring the pair dashing to save Sam and Margaret Randal from a gang attempting to kidnap Sam. The housebreaking may be part of a series of recent burglaries, but this latest incident doesn’t seem to fit the pattern. So Sam, wondering if he’s been specifically targeted, hires the two former Army Rangers, who luckily have a good team running their pawn shop, to protect him and his wife until the case is solved. Charlie identifies one of the invaders as Ray Geiger, who operates a martial arts school specializing in troubled teens. Ray’s father is a former NYPD cop who left the force early under suspicious circumstances. Although Sam and Margaret can’t think of anyone who’d want to harm them, it’s clear that they have some serious enemies when Charlie and Gordon are targeted for injury or death and a sniper shoots up Sam’s place of business. It’s lucky that the dynamic duo has a good history with the Albuquerque police (Grave Consequences, 2015, etc.), because every day they get into more trouble trying to escape booby traps and what seems like an endless stream of people out to kill Charlie and kidnap Sam. Until the good guys can figure out why Sam’s on the spot, they’re all in danger.

A little mystery and a lot of mayhem keep the pot boiling in another wild tale of former military men putting their skills to good use in civilian life.