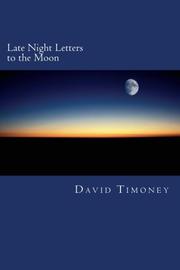 Late Night Letters to the Moon

Timoney’s book—“based on some true events”—follows a crooked real estate broker who does time and emerges a better man.

Though Timoney admits that the people and events are fictitious, his book reads like an intimately narrated memoir. Without fanfare or expository introductions, Timoney writes with urgency of a narrator named Dave being haunted for decades by his parents’ separation when he was 9; the fallout of that trauma was too easily buffered with alcohol dependency later in life. Backtracking to his 20s, Dave deftly chronicles life in the South Bay region of Northern California and, at his father’s urging, his becoming a real estate broker, which was initially a successful endeavor, until the recession of the early 1980s. As property values plummeted, investors became litigious against Dave; that stress, he says, caused him to begin mixing anti-anxiety medications with copious amounts of alcohol and to make fraudulent financial maneuvers with his customers’ money—all cresting with the dissolution of his marriage. His painfully described downward spiral culminated in 1990 with a 30-day stint in rehab and then an intensive governmental investigation, which fueled an indictment and sentencing to 37 months in prison and $500,000 restitution. Much of the remainder of the story comprises Dave’s gritty incarceration at two federal prison camps in California. As if drawn from the pages of a journal, Dave affably describes the excessive desert heat, sleeping alongside snoring cellmates in an 8-by-12-foot confined space, jail work in food service, various sexual release methods, yard duty and lots of time spent writing about life; “Some of it landed here on this page,” he notes. All of what he describes seems incredibly tame compared to a modern jail’s reputation for violence and misery, though his positive attitude and a cavalcade of mostly harmless inmates (including transgendered “shemale” Mica) may have made the “humorous, boring, introspective, frustrating, confusing, a little scary and a little uncertain” aspects of prison life more bearable. However, his re-entry into society proved anything but.

Revelatory and thought-provoking, a redemptive story that eloquently chronicles the long road to right a wrong.