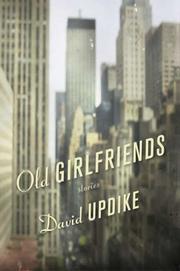 Family, infidelity and faith anchor the carefully constructed stories in a collection by John Updike’s son.

Updike (stories: Out on the Marsh, 1988, etc.) seems uninterested in distancing himself from some of the favorite themes of his late father. Indeed, an occasional story evokes the romantic machinations of novels like Couples. In “Geranium,” a young man becomes increasingly obsessed with the relationship between a fellow boarder and their married landlady. “Kinds of Love” follows one man’s complicated efforts to escape his family on a Sunday to attend church with his mistress, wrestling with all the guilt and compulsion that such an effort entails. In “Adjunct,” a glum, self-loathing English 101 teacher pursues a relationship with one of his students, even while he’s aware of the pursuit’s utter futility. Though David can’t claim John’s graceful style and psychological depth, his prose is pleasantly unfussy and direct. “In the Age of Convertibles” is a knowing portrait of a teenager’s growing wisdom about girls, and about how he can shift his place in the family’s pecking order. Updike is clearly in his comfort zone when he’s writing about lovelorn men, and his command gets wobblier when he takes different tacks. “A Word with the Boy” turns on an incident in which London police briefly separate the narrator from his darker-skinned son; it’s a thin premise, and the story stumbles to a moralizing close. That simplistic shape is echoed in “Love Songs From America,” whose narrator visits his wife’s home in an unnamed African country with their son; though Updike’s observations of the culture are well-written, there’s little story to speak of. In “The Last of the Caribs,” the author successfully merges his interest in writing about both romantic need and culture clashes. Following a married man foolishly flirting with a young woman in the Lesser Antilles, he displays a rich knowledge of the Caribbean landscape and nicely captures the quiet despair of the protagonist.

Thoughtful and restrained work from a writer clearly unintimidated by the family name.