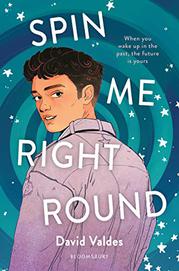 SPIN ME RIGHT ROUND

A gay teen contends with time travel—and homophobia through the decades.

All Cuban American Luis wants is to be prom king with his boyfriend, but tiny upstate New York boarding school Antic Springs Academy, with its strict, Christian code of conduct, won’t even let them hold hands in public. After a disastrous prom committee meeting at which his attempt to make the event welcoming of queer couples is rejected by the principal, Luis gets quite literally knocked into the past—specifically, ASA in the year 1985. There he meets Chaz, a Black student who attended the school at the same time as Luis’ parents and who died under mysterious circumstances after being bullied for his sexuality. Luis now faces a choice between changing the past to help Chaz and preserving his own future existence. Fortunately, he has Ms. Silverthorn, a Black English teacher and beloved mentor, who offers him support in both timelines. The narrative explores the impacts of homophobia and being closeted, remaining optimistic without shying away from the more brutal aspects. Luis is a multifaceted character with an engaging voice whose flaws are confronted and examined throughout. The solid pacing and pleasant, fluid prose make this a page-turner. Luis’ boyfriend is cued as Chinese American, and his best friend is nonbinary; there is some diversity in ethnicity and sexuality in background characters, although the school is predominantly White.

A great read offering entertainment, encouragement, and plenty to reflect upon.