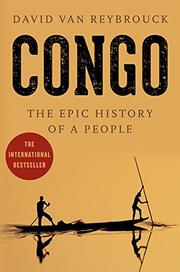 The Epic History of a People

Sprawling portrait of a land that, by Belgian writer van Reybrouck’s account, has been at the center of world history as well as a continent.

The subtitle is a touch off, for as the author notes, Congo is home to hundreds of peoples, even if there is “great linguistic and cultural homogeneity” owing to the dominance of Bantu-speaking tribes. About 10 percent of all Africa falls within its borders, as well as most of the 2,900-mile-long river that gives it its name. It has been independent of Belgian colonialism for half a century—longer, observes the author, than most of its people have been alive. Still, van Reybrouck turns up some old-timers (one claiming to have been born in the 19th century) to frame his long story of the land’s development, one that hinges on generations of trade along the river. Since independence, the country has fallen into disrepair born of political discord and official corruption. The country’s four major cities are no longer connected by road, of which Congo possesses only 600-odd asphalt miles; as a rule of thumb, “a journey that took one hour during the colonial period now corresponds to a full day’s travel.” Yet this is no paean to past colonial splendor; van Reybrouck well recognizes the murderous policies of Belgium’s King Leopold, and he sees some hope for stability emerging from conditions that otherwise have served as a recipe for a failed state. The causes for the decline have been many, but as the author notes, the country had to endure in just the first six months of independence a flight of the European colonials, an invasion by the Belgian army, a military mutiny, a coup d’êtat, widespread secession and a protracted hot season in the long Cold War.

Though the book is overlong, van Reybrouck makes a good case for the importance of Congo to world history and its ongoing centrality in a time of resurgent economic colonialism, this time on the part of China.