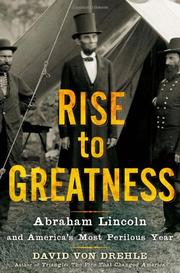 A historian zeroes in on the year Lincoln found his footing as president and set the country on a bold new course.

“Never has there been a moment in history,” said one U.S. senator, “when so much was all compressed into a little time.” Von Drehle (Triangle: The Fire that Changed America, 2003, etc.) charts the tumultuous year, month by month, to demonstrate how the momentous events of 1862 unfolded. Amid the turmoil of Civil War, the largely Republican Congress passed legislation with far-reaching postwar consequences: funding a transcontinental railroad and land-grant colleges, strengthening the Army and Navy, establishing a Bureau of Agriculture, adopting new fiscal and monetary policies, outlawing slavery in the District of Columbia, instituting a draft and authorizing the enlistment of blacks in the military. For all these enterprises to flourish, though, the war still had to be won. With rumors of domestic conspiracies and coups swirling and with the allegiance of border states still tenuous, the Civil War turned savage and hard with unprecedented slaughters at places like Shiloh, Antietam and Fredericksburg. At the center of the storm, Von Drehle deftly places Lincoln, gradually mastering the art of war, ultimately firing the too-timid McClellan, solemnly accepting and desperately searching for a general to apply the cruel arithmetic necessary for Union victory. In 1862, Lincoln suffered the loss of a son and the near loss of another, and he watched his grieving wife become unmoored. All the while, the president maneuvered around Taney’s Supreme Court, quelled an insurrection in the Republican caucus, mediated the squabbling in his Cabinet, held off the Democrats in the midterm elections and prepared the ground for the Emancipation Proclamation. Two years of bitter fighting remained, but Confederate armies would never again be as formidable. Meanwhile, under Lincoln’s steady hand, the Union put in place the political and military machinery that would win the war and assure a future few imagined before Fort Sumter.

A thoroughly engaging examination of the irreversible changes emerging from a year when the nation’s very survival remained in doubt.