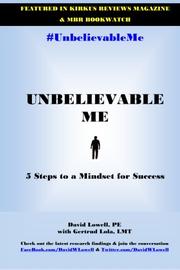 From Isaac Newton to the Nazis to the unbounded potential of the 21st century, this hybrid of self-help guide and historical document explores the concept of the “fixed mindset”—the cultural, intellectual and emotional forces that encourage people to limit themselves from growing in their accomplishments, abilities and self-esteem. Lowell and Lola frame two camps: those who assume a fixed mindset approach toward life and whose intelligence and abilities are therefore inherently unchangeable and those who embrace the notion of personal growth. The authors explain: “Instead of accepting difficult challenges, learning from their failures, and sometimes being pleasantly surprised when they succeed, people with the fixed mindset only undertake challenges at which they are sure they will be successful. By doing so, they continuously confirm the level of ability they believe they have, and further reinforce their beliefs about their lack of talent.” The book elegantly transitions from scientifically documented studies and historical anecdotes to exercises designed to help participants understand the psychological blockages they carry within themselves. The penultimate section, a workbook, includes prompts that encourage readers to write down ideas that will help them break through their self-imposed barriers. The clearly written text is engaging both as a self-help guide and as a striking compendium of facts. Nazi Germany, for example, began involuntarily sterilizing people only after finding precedent in American practices of the period. The unusual perspectives on geniuses such as Einstein, Newton and others provide a welcome change from typical portraits.

An inventive, entertaining mix of history, research and self-help.