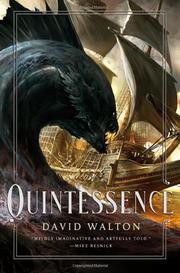 A serious 16th-century alternate-world history set on a flat Earth where alchemy works, from the author of the award-winning Terminal Mind (2008).

King Edward VI of England, Henry VIII’s young, sickly son, continues his father’s Protestant reforms. The king’s physic, Stephen Parris, dissects corpses (in secret, lest he be accused of witchcraft) in an effort to learn how the body works. Alchemist Christopher Sinclair, who seeks the Philosopher’s Stone, or quintessence (the three essential alchemical elements are salt, sulfur and mercury—so what’s the fourth?), believing such a substance would grant him the ability to raise the dead. Sinclair learns of Parris’ activities and blackmails him into sponsoring a voyage to the edge of the world, where the ocean plunges off into the abyss—and where he believes he will find quintessence. Adding to the pressure on Parris, the king is dying and will be succeeded by Mary Tudor, a fierce Catholic (known to history as Bloody Mary) determined to restore the primacy of Rome. As a Protestant and diabolist, Parris would not survive Mary’s reign, so he agrees to flee with Sinclair, taking along his intelligent and adaptable daughter Catherine against the wishes of his Catholic wife, Joan. Eventually, they reach an island on the brink and find that quintessence abounds: Its powers are all that Sinclair dreamed of and more. But then a Spanish galleon sails into the harbor, guided by Joan in search of Catherine; Mary is now Queen of England, and aboard the galleon is Diego de Tavera, envoy to King Philip of Spain—and a sadistic, ruthless Inquisitor. Against this intricate backdrop, the characters experiment, explore, debate ethics, philosophy and religion, and try to coexist with intelligent nonhumans. The big drawback, however, is Walton’s willingness to ascribe all the messy and inconvenient but unavoidable details of the world’s structure to the will of God, a pretext that should rightly be regarded as a cop-out. Still, the action builds to a thrilling and memorable finale.

Flawed, then, but impressive and often brilliant.