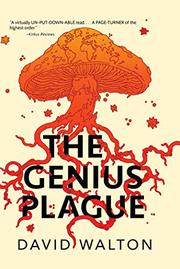 When mycologist Paul Johns returns home to Maryland from the Amazon rain forest in Walton's (Supersymmetry, 2015, etc.) latest, he is a changed man.

After recovering from a severe case of fungal pneumonia, the 21-year old fungi expert is markedly more intelligent; he suddenly has an eidetic memory and radically enhanced communication abilities—but something is off. The spores he breathed in while traveling have taken root in the linings of his lungs and spread throughout his body, and the same thing is happening to thousands of other people who've come in contact with the fungus; they are now connected together in a vast organic neural network. But the seemingly symbiotic relationship between fungi and human may not be the next evolutionary step in human development, as Johns thinks. Those infected by the spores have masterminded assassinations of the political leaders of Colombia, Peru, and Brazil, and the number of people afflicted by the mind-altering infection is growing exponentially by the day. Paul’s brother, Neil, following in their father’s cryptologist footsteps, recently landed a job with the National Security Agency. Charged with decoding encrypted messages originating from the Amazon area, he begins putting together the pieces of a mind-blowing conspiracy that could wipe humankind off the face of the Earth. Paired with relentless pacing, an action-packed narrative, and a cast of interesting characters, Walton’s fluid writing style and tightly constructed plot produce a virtually un-put-down-able read. The only minor criticisms are a few implausible sequences (like Neil getting hired by the NSA with no college degree) and a conclusion that seems a bit rushed.

Tonally the love child of Crichton’s The Andromeda Strain and Aldiss’ SF classic Hothouse, this is a page-turner of the highest order.