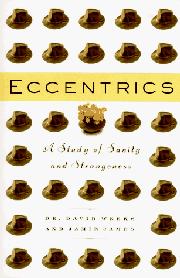 A Study of Sanity and Strangeness

A neuropsychologist works hard to build an authoritative definition of eccentricity. American-born Weeks, who practices at the Royal Edinburgh Hospital, began his study by posting index cards around the city soliciting phone calls from people who thought they might be eccentric. The appeal was picked up by local and national media, and even made the American press, leading Weeks to claim that he has sampled the largest population group ever targeted by a psychologist. If you buy this, then you won't have any trouble with the rest of this frustratingly pedantic study of delightfully quirky people. Weeks's fascination stems from the fact that eccentrics seem to be happier than the rest of us, more secure in their convictions, and often wildly creative. If Weeks and coauthor James (The Music of the Spheres, 1993) would only stick to vivid descriptions of Weeks's astonishing subjectsthe president of the Martin Van Buren fan club, the woman who builds perpetual-motion machines in her garage, or the two Brooklyn artists who live exactly as though it were 1895readers could draw their own conclusions about the boundaries of eccentricity. Instead, Weeks theorizes endlessly, assigning quantitative values to personality traits, language skills, even the class distribution of eccentrics through the ages. He spends far more time on historical oddballs (cross-dressing French revolutionaries and masochistic English lords) than on his own contemporary pool. The inevitable problem, though, is that in order to define what is eccentric, Weeks needs to define what is normal, and that is a feat no scientist has ever achieved. In his conclusion, Weeks proclaims that eccentricity is ``utterly harmless, and a source of decency, tolerance, and respect for different views and different people.'' His insistence on a utopian vision contained in these odd lives is, well, a bit eccentric. (Author tour)