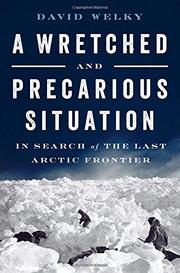 A WRETCHED AND PRECARIOUS SITUATION

In Search of the Last Arctic Frontier

The story of a 1913 Arctic expedition to investigate what the New York Tribune called “the last considerable mass of unknown land on our planet.”

Welky (History/Univ. of Central Arkansas; Marching Across the Color Line: A. Philip Randolph and Civil Rights in the World War II Era, 2013, etc.) recounts the effort by two eager young acolytes of Cmdr. Robert E. Peary to reveal the secrets of Crocker Land, a large, undiscovered landmass the famed explorer reported seeing on his failed 1906 attempt to reach the North Pole. Making magnificent use of documents and re-creating the yearslong Arctic sojourn with the drama and immediacy of a tension-filled adventure novel, the author conjures a romantic quest emblematic of the rugged manliness of the time. In the spirit of Teddy Roosevelt and with Peary’s blessing and the sponsorship of the American Museum of Natural History, the young explorers—Bowdoin graduate Donald MacMillan and Yalie George Borup—set out on a steamer with all the fanfare due an ambitious scientific exploration. Their journey, pitting a seven-man crew against the perils of Arctic life, from blizzards and ice floes to winter darkness and loneliness, involved “triumph, frustration, joy, infighting, betrayal, and murder” in “one of the harshest environments on the planet.” Working with such material and telling his story in vivid scenes rendered in wonderfully sharp declarative sentences, Welky offers a vibrant portrait of the young adventurers, their loyal Inuit helpers, and the ever present dangers of a forbidding place where, as leader MacMillan said, “the evil spirit of the Arctic is always watching.” Examining every aspect of the mission and its historical context, the author captures the can-do, all-American-boy spirit of the age, the constant fears of unforeseen disasters on the ice, and the fossil- and specimen-collecting mania that drove so much exploration. He also describes the expedition’s surprising discovery upon approaching Crocker Land in a way that enhances the fascination of his story.