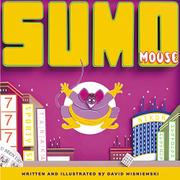 Stronger than the Incredible Hulk, more agile than Spiderman, purpler than Barney, here’s Sumo Mouse, mysterious, masked protector of Japanese mousedom and thunder-thighed bane of feline malefactors everywhere. Having obviously steeped himself in sumo and martial-arts movie lore, the late master of cut-paper and Caldecott winner (Golem, 1996), Wisniewski sends his first-class foe-squasher hurtling from Tokyo’s rooftops to free hundreds of mice—all rendered as distinct individuals in characteristically flamboyant razor-cut paper collages—slated for insertion into squeaky toys manufactured by the unscrupulous Tiger Tanaka. Who is this globular do-gooder? Believing that he could only be grand champion wrestler Gachinko, Tanaka dispatches a gigantic robot to turn the renowned rikishi into sushi. But as the corpulent caped one is actually Gachinko’s friend Yama, a diminutive barber with the soul of a sumo and a very special suit in his basement, the stage is set for a nick-of-time rescue—and a shattering, spread-filling tsuma-dori smackdown. Three cheers for the mightiest mouse since, well, Mighty Mouse, who now looks so last-millennium. (Picture book. 7-9)